SINCE 1961 MANY EXPERIENCES GAINED TOGETHER WITH OUR CUSTOMERS

Started in 1961 in a small building in Molinetto di Mazzano (BS) not far from the Garda Lake, that of MCS Morandi has always been a family story. The brothers Pietro, Mario, Giovanni and Franco, passionate about mechanics, following the wave of the flourishing Italian industrial development, had an idea and the courage to make it happen.

Since the early years, the company's choice has been to specialize in the construction of precision injection moulds for plastics, with the determination to offer its customers a complete and professional range of services.

The decision to work for foreign markets dates back to those early years. In 1966 MCS Morandi was already producing for the American market and soon exported almost 90% of its turnover to European and non-European countries including the USA, the UK, Russia, South Africa, Venezuela and Turkey.

In 1969, the first expansion took place, with a covered area of 2,000 square metres. The first supplies of injection moulds for the Automotive sector began.

From 1975 to 1978 the company built 150 moulds for automotive customers in Russia, for the construction of the Russian Fiat 124, better known as the Lada-Vaz Žiguli, the car that actually powered the Soviet Union. In 1984, following a further expansion, 4000 square meters of covered area were reached. 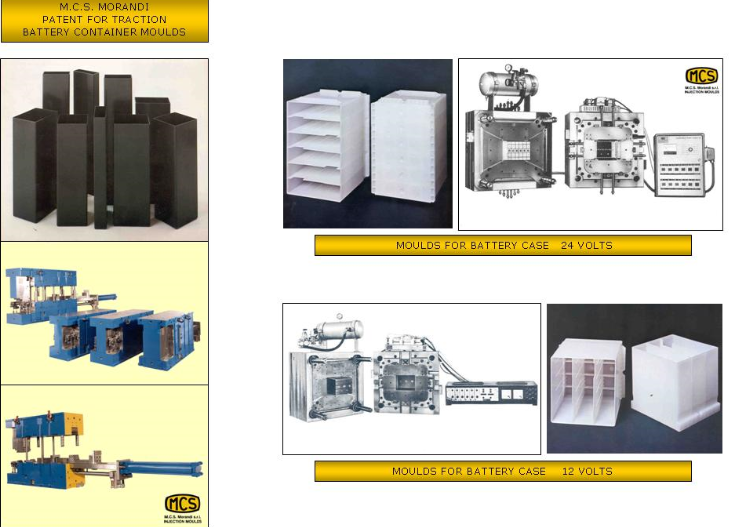 INNOVATION IN MOULDS FOR BATTERY CONTAINERS

The patents filed by MCS Morandi regarding the construction of improved moulds for the moulding of polypropylene containers, of all sizes, for traction batteries and accumulators, made with straight walls without conicity, date back to the 80s.
Previous
Next

Design on display at the permanent exhibition Triennale in Milan

Between 1967 and 1972 MCS Morandi was commissioned to build moulds for items designed by great Italian designers of the time, for the Furniture sector.

Some of these items are now on permanent display at the Triennale in Milan, including:

Founded in 1961 by the brothers Pietro, Mario, Giovanni and Franco, the company specializes in the design and construction of high-precision injection moulds for plastics.

First exports of moulds to foreign markets, in particular to the USA and UK for items in the household appliances and housewares sector.

Production of moulds for items in the furniture sector, signed by some of the great Italian designers of the time. Some of these items are still on display in the permanent exhibition at the Milan Triennale.

First expansion of the production area, reaching a covered area of 2000 square meters.

First supplies of injection moulds for the automotive sector.

Construction of 150 moulds for Russia, Automotive sector, based on the Fiat 124, aka the Lada-Vaz Žiguli, the car that powered the Soviet Union.

Construction of moulds for polypropylene containers for traction batteries and accumulators of all sizes, made with straight walls without tapering according to M.C.S. MORANDI patent no. 7838 / Italy and other European countries.

New construction and expansion of the company, which reaches 4000 covered square meters.

First 3D CAD / CAM system, which supports and assists the entire process of designing and building a mould.

Transformation of the company’s business name from “S.n.c.” to “S.r.l.”.

First control unit for the management of sequential injection.

Injection mould for the first AUDI A6 Center Console, made in one piece (front + rear).

Gas assisted injection system with compressor up to 350 bar and 4-way control unit.

First mould with “insert moulding and over moulding” technique with inserts in composite material (Organo-sheets) and metal inserts, for the American automotive market.

The 2200 t injection moulding machine is equipped with a fully automated robot with up to 4 axes, with a grippier and a maximum capacity of 45 kg.

In the context of Metal Replacement projects, which see the use of high-performance polymers instead of metal, since 2011 we have made several moulds for aesthetic items in Sabic® Ultem 1000 resin, still in continuous production with high temperatures of exercise (about 160-180 °C).

The great attention paid to try to best meet the needs of leading customers in various sectors has allowed us to increase our skills and allows us to offer experience and know-how, in particular where high quality performance and cutting-edge technologies are required for high production capacities.

Functionality, stability and long life of the moulds, innovative mechanical solutions to reduce cycle times and operating costs during series production: these are the prerogatives that have placed MCS Morandi among the most important European leaders in the production of high precision moulds. 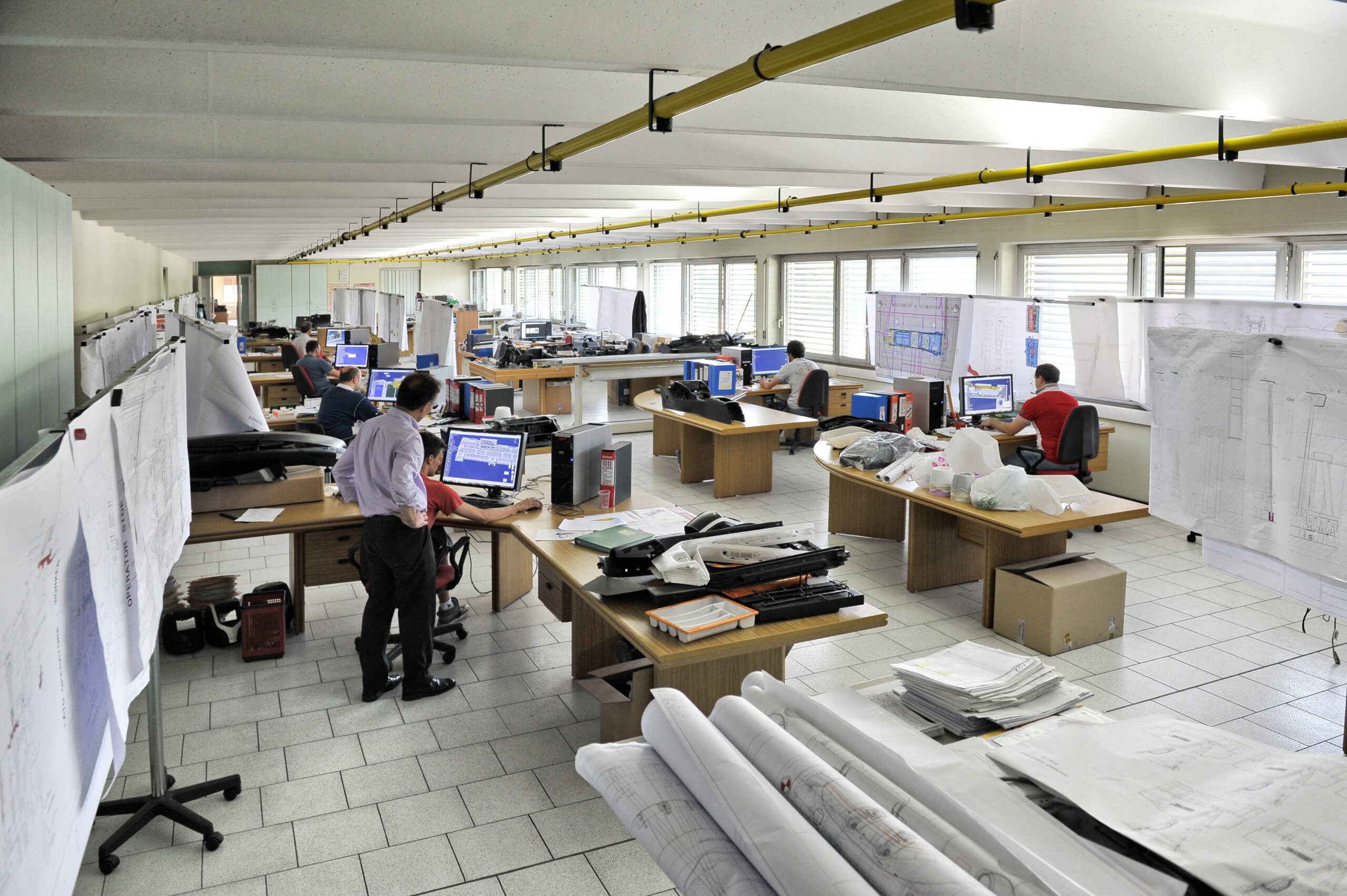 This website uses cookies to improve your experience while you navigate through the website. Out of these, the cookies that are categorized as necessary are stored on your browser as they are essential for the working of basic functionalities of the website. We also use third-party cookies that help us analyze and understand how you use this website. These cookies will be stored in your browser only with your consent. You also have the option to opt-out of these cookies. But opting out of some of these cookies may affect your browsing experience.
Necessary Always enabled
Necessary cookies are absolutely essential for the website to function properly. These cookies ensure basic functionalities and security features of the website, anonymously.
Functional
Functional cookies help to perform certain functionalities like sharing the content of the website on social media platforms, collect feedbacks, and other third-party features.
Performance
Performance cookies are used to understand and analyse the key performance indexes of the website which helps in delivering a better user experience for the visitors.
Analytics
Analytical cookies are used to understand how visitors interact with the website. These cookies help provide information on metrics such as the number of visitors, bounce rate, traffic source, etc.
Advertisement
Advertisement cookies are used to provide visitors with relevant ads and marketing campaigns. These cookies track visitors across websites and collect information to provide customized ads.
Others
Other uncategorised cookies are those that are being analysed and have not been classified into a category as yet.
ACCEPT AND SAVE